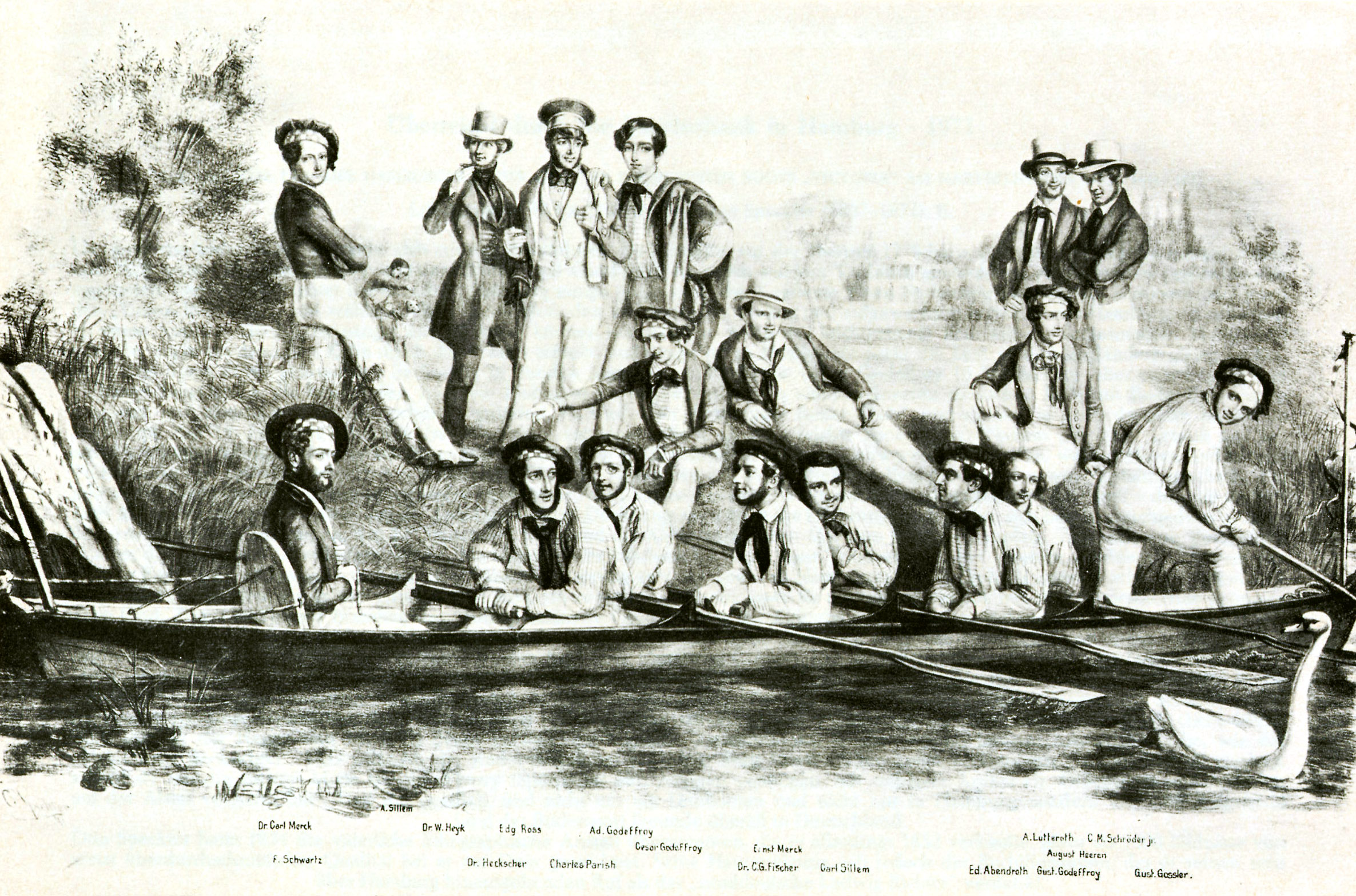 From its history, the CLUB as one of the oldest sports clubs in the Hanseatic city cultivates its tradition of always promoting and further developing rowing and being open to competitive sport. This long tradition makes us proud, but even more so for the club members it is an obligation for the future.

The CLUB is the oldest rowing club in the world founded outside England and one of the largest in Germany after four first foundations in England, of which the Leander Club in Henley, England, is the most important.

In June 1836, eleven young Hamburg merchants around Cesar and Adolf Godeffroy began rowing on the Alster. The Hamburg Rowing Club (DHRC) is the first rowing club in Germany. The founding document states the goal: “The rowing club is a sociable association whose main purpose is joint rowing exercises.

Already in the first year it comes to the sporty competition with the English rowers resident in Hamburg. In 1844 the first regatta in Germany takes place on the Alster under the cheers of thousands of spectators. The CLUB wins.

In April 1853 young Hamburgers meet around the pupil Hermann Wentzel and found the Germania Ruder Club (GRC). A conspiring community linked to sporting ideals and a love of emerging water sports. She brought new boat technology and sportive rowing training, but also sports sailing to the Hanseatic city. And they had success. The first German start abroad in Paris in 1867 and the first German Oympia victory in rowing in 1900, also in Paris, are her milestones.
Both clubs have many sporting and social points of contact, in their heyday but also in times of stagnation. The CLUB resides on the banks of the Alster in Harvestehude, the Germania has its boathouse Am Langenzug on the Uhlenhorst.
The foundation of the North German Regatta Association (NRV), the Club an der Alster (CadA), the German Rowing Association (DRV), but also the German Sailing Association (DSV) can be traced back to the rowers from Harvestehuder Ufer and Uhlenhorst.

After the First World War the reconstruction of both clubs begins and there are great sporting successes to celebrate. Both clubs merged in 1934 to form the “Der Hamburger und Germania Ruder Club”, with the Bootshaus am Alsterufer – today’s domicile.

The club celebrates its 100th anniversary, it’s a festival under the swastika. When the “Jung-Germania” was asked to introduce the Führer principle and to exclude “half-Jewish” comrades, it dissolved.

After 1945, the British military administration confiscates the boathouse. At Isekai, the CLUB finds an alternative accommodation and can move back into the boathouse on the banks of the Alster in 1952.

Regardless of the cooperation with schools that has lasted for decades, the CLUB was one of the first rowing clubs in Germany to start and promote rowing for children in the mid-1960s.

In 2011 the CLUB celebrates its 175th birthday – the equivalent of 175 years of rowing in Germany! Today, the CLUB is the second oldest rowing club in the world after the Leander Club in Henley, England.
The Hamburg and Germania Ruder Club, 175 Years of Rowing in Germany, 1836 – 2011″. This volume can be purchased at the CLUB.

The CLUB inaugurates its new boathouse on the old square.

This website uses cookies to improve your experience while you navigate through the website. Out of these, the cookies that are categorized as necessary are stored on your browser as they are essential for the working of basic functionalities of the website. We also use third-party cookies that help us analyze and understand how you use this website. These cookies will be stored in your browser only with your consent. You also have the option to opt-out of these cookies. But opting out of some of these cookies may affect your browsing experience.
SAVE & ACCEPT